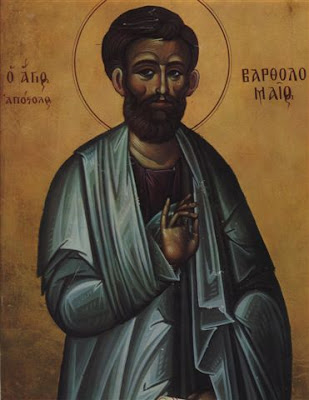 The feast of St. Bartholomew the Apostle is of double rite and the liturgical colour of the day is red. The feast was preceded by a Vigil yesterday. The fourteenth Sunday after Pentecost, and the fourth Sunday of August, is commemorated at Vespers, Mattins, Lauds and Mass. In Rome the feast of St. Bartholomew is observed on the 25th August - the anniversary of the translation of his relics.

At first Vespers yesterday afternoon the antiphons Hoc est praeceptum meum etc were sung with the psalms of first Vespers from the Common Apostles (Pss. 109, 110, 111, 112 & 116). The Office hymn was Exsultet caelum laudibus. After the collect of the feast a commemoration was sung of the Sunday (the antiphon on the Magnificat being Sapientia for the Saturday before the fourth Sunday of August). The Suffrages were omitted as were the Dominical preces at Compline.

At Mattins the invitatory is Regem Apostolorum Dominum, venite adoremus and the Office hymn is Aeterna Christi munera. In the first nocturn the antiphons In omnem terram etc are sung with psalms 18, 33 & 44. The lessons are Sic nos existimet homo from the former Epistle of St. Paul to the Corinthians. The third lesson is longer than that found in the later editions continuing with vv 16-21 of the fourth chapter. The responsories are from the Common of Apostles. In the second nocturn the antiphons Principes populorum etc are sung with psalms 46, 60 & 63 followed by lessons proper to the feast. The sixth lesson is slightly longer having more sentences (concerning the translation of St. Bartholomew's relics to San Bartolomeo all'Isola and the eight days of festivities the Romans make there. This reference was suppressed in the 1911-13 reform). In the third nocturn the antiphons Exaltabuntur etc are sung with psalms 74, 96 & 98. The homily is taken from a commentary by St. Ambrose on St. Luke's Gospel. The ninth lesson of the feast is longer by a sentence than those found in the post-Clementine editions. Today it is read together with the eighth lesson of the feast to form an extended eighth lesson and the ninth lesson is formed from the three lessons appointed for the homily of the Sunday. These are from St. Augustine on St. Matthew's Gospel. The lessons are longer than those found in the modern Breviary. The seventh lesson (of the Sunday) includes most of the text of the modern eighth lesson, the eighth lesson contains text not found in the later editions and the ninth lesson contains the text of the modern ninth lesson and, in addition, several more sentences. The Te Deum is sung.

At Lauds the antiphons Hoc est praeceptum meum etc are sung with psalms 92, 99, 62-66, Benedicite & 148-149-150. The Office hymn is Exsultet caelum laudibus. After the collect of the feast a commemoration of the Sunday is sung.

At the Hours the antiphons from Lauds are sung in the usual order. At Prime the festal psalms are sung (Pss. 53, 118i, 118ii). Both Quicumque and the Dominical preces are omitted. The lectio brevis is Ibant Apostoli.

At Vespers the antiphons Juravit Dominus etc are sung with psalms 109, 112, 115, 125 & 138. The Office hymn is, again, Exsultet caelum laudibus. After the collect of the feast commemorations are sung of the Sunday and of the following Office of St. Louis. The Suffrages are omitted as are the Dominical preces at Compline.

Icon: Melkite Eparchy in Australia
Posted by Rubricarius at 07:01