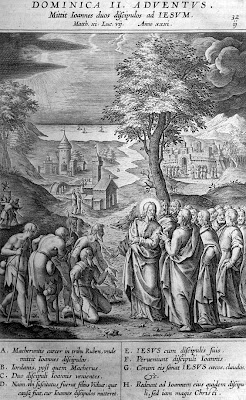 The Second Sunday of Advent is of semi-double rite and its liturgical colour, is violet.

At Vespers yesterday afternoon the antiphons Ecce sacerdos magnus etc were sung, with psalms 109, 110, 111, 112 and 131. The chapter was Fratres: Quaecumque scripta sunt and the Office hymn was Conditor alme siderum. After the collect of the Sunday a commemoration of the preceding Office of St. Nicholas of Myra was sung. The Suffrages were omitted being Advent but the Dominical preces were sung at Compline.

At Mattins the invitatory is Regem venturum and the hymn is Verbum supernum. In the first nocturn the antiphons Veniet ecce Rex etc are sung with Pss. 1, 2, 3, 6, 7, 8, 9, 10, 11, 12, 13 & 14. The lessons in the first nocturn are taken from the prophet Isaiah. The first lesson, about the wondrous Jesse Tree, is longer than that found in the post-Clementine editions and continues with the first lines of the modern second lesson: Et percutiet... until ...cinctorium renum ejus. The second lesson begins Habitabit lupus... and continues until two-thirds through the modern third lesson, ...sicut aquae maris operientes. The third lesson begins In die illa radix Jesse... and continues until ... et hostes Juda peribunt, i.e. the addition of vv. 11 -13 from the eleventh chapter. In the second nocturn the antiphons Gaude et laetare etc are sung with Pss. 15, 16 and 17. The lessons are taken from the Exposition on Isaiah by St. Jerome. These are substantially longer than in the modern editions of the Breviary. The fourth lesson comprises the entirety of the modern fourth and fifth lessons. The fifth lesson contains text absent from the modern sixth and the sixth lesson text is completely absent from the modern editions. In the third nocturn the antiphons Gabriel Angelus etc are sung with Pss. 18, 19 and 20. The homily is from St. Gregory's writing on St. Matthew's Gospel. Again, these are significantly longer than those in the modern editions with the sevent lesson comprising of all of the modern seventh and eighth lessons. The eighth lesson contains all of the modern ninth and an equal amount of text from the St. Gregory's homily that is absent from the modern editions and the ninth lesson is completely absent from the modern Breviary. A ninth responsory, Ecce Dominus veniet, is sung and the Te Deum omitted in the Office of Advent.

At Lauds the antiphons Ecce in nubibus caeli etc are sung with psalms 92, 99, 62-66, Benedicite and 148-149-150. The Office hymn is Vox clara ecce intonat.The Suffrages are omitted in Advent.

Mass is sung after Terce. The ministers wear folded chasubles. The Gloria in not sung, the second collect is of of the Blessed Virgin in Advent, Deus, qui de beate and the third collect is Ecclesiae. The Creed is sung, the preface is the Common Preface. As the Gloria is not sung, the dismissal is Benedicamus Domino, sung by the deacon facing the altar.

At Vespers there is a colour change to white and the antiphons Conceptio gloriosae Virginis Mariae are sung, doubled, with psalms 109, 112, 121, 126 & 147. The Office hymn is Ave maris stella. After the collect of the feast a commemoration is sung of the Sunday. The Suffrages are omitted. At Compline Te lucis is sung with the Doxology Gloria tibi Domine etc. The Dominical preces are omitted.