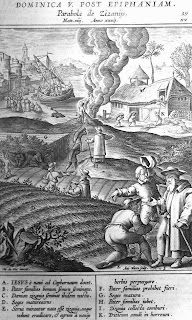 The twenty-fourth Sunday after Pentecost is of semi-double rite. This year it is the third Sunday of November as the second Sunday, and its week, are omitted this year and also Sunday within the Octave of All Saints. The liturgical colour is white. As there are twenty-six Sundays after Pentecost this year, following the praxis introduced into the 1570 Missal, the pericopes at Mass, and the third nocturn lessons of Mattins, antiphons for the NT canticles and collect come from the fifth Sunday after the Epiphany. The introit, intra-pericope chants, offertory and communion are those given in the Missal for the twenty-third Sunday. The Gospel pericopes from St. Matthew speak of the parable where the enemy sows cockle seed into the field of good seed.

At Vespers yesterday afternoon the antiphons Vidi turbam magnam etc were sung, not doubled, with Pss. 109, 110, 111, 112 & 116. From the chapter, O Altitudo the Office was of the Sunday. The Office hymn was O lux beata Trinitas. The antiphon on the Magnificat was Muro tuo for the Saturday before the third Sunday of November. After the collect of the Sunday a commemoration of the Octave was sung. The Suffrages were omitted as were the Dominical preces at Compline.

At Mattins the invitatory is Adoremus Dominum and the Office hymn Primo dierum omnium. In the first nocturn (Pss. 1, 2, 3, 6, 7, 8, 9, 10, 11, 12, 13 & 14) the lessons are the Incipit of the Book of the Prophet Daniel. The first and second lessons are the same as those found in later editions of the Breviary but the third lesson is a sentence shorter, ending with the words ..facies cum servis tuis. In the second nocturn (Pss. 15, 16 & 17) the lessons are from the book to Virgins by St. Athanasius. These are the same as those found in modern editions. In the third nocturn (Pss. 18, 19 & 20) the homily is from St. Augustine on St. Matthew's Gospel (from the V Sunday after Epiphany). These are identical to those found in the post-Clementine editions of the Breviary. The Te Deum is sung.

At Lauds the Sunday psalms (Pss. 92, 99, 62-66, Benedicite 148-49-150) are sung. The antiphon on the Benedictus is Domine etc. After the collect of the Sunday a commemoration of the Octave is sung. The Suffrages are omitted being within an Octave.

Mass is sung after Terce. The introit is Dicit Dominus etc Gloria is sung, the second collect is of the Octave of All Saints. Being a Sunday within an Octave today there is no third collect is. The Credo is sung and the Common Preface is sung.

At Vespers the antiphons and psalms of Sunday are sung. The Office hymn is Lucis creator. After the collect of the Sunday a commemoration of the Octave is sung. The Suffrages are omitted as are the Dominical preces at Compline.
Posted by Rubricarius at 08:01