January 8th - Sunday within the Octave of the Epiphany 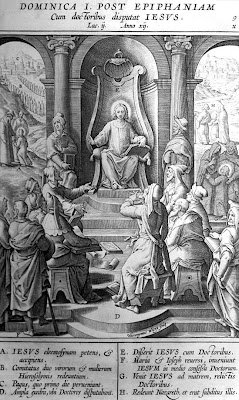 At Vespers yesterday afternoon the antiphons Ante luciferum genitus etc were sung, not doubled, with Pss. 109, 110, 111, 112 & 113. The chapter, Fratres: Obsecro vos, was proper to the Sunday. The Office hymn was Hostis Herodes impie. After the collect of the Sunday within the Octave a commemoration was sung of the Octave of the Epiphany (the antiphon on the Magnificat being proper to the second day within the Octave, the 7th January, Videntes stellam Magi. The Suffrages were omitted. At Compline Te lucis was sung with the Doxology Gloria tibi Domine, Qui apparuisti hodie etc as are the hymns of the Hours throughout the Octave.

At Mattins the invitatory is Christus apparuit nobis, Venite adoremus. The Office hymn is Hostis Herodes impie. The antiphons and psalms are as on the second day within the Octave. In the first nocturn the Incipit of St. Paul's Epistle to the Corinthians is read. The lessons are longer than those found in the post-Clementine editions: The first lesson includes the modern second lesson Gratias ago Deo meo ... Christi, Domini nostri. The second lesson begins Obsecro autem, the same as the modern third lesson. The third lesson is absent from the modern editions, Gratias ago Deo...prudentiam reprobabo, i.e. vv. 14 - 19. The first responsory is Hodie, the other responsories as on the feast. In the second nocturn the lessons are from a sermon of St. Leo (again these are longer than in the post-Clementine editions of the Breviary). In the third nocturn the homily is from St. Augustine, the lessons are the same as in the modern editions. The Te Deum is sung.

At Lauds the antiphons from the feast, Ante luciferum genitus etc are sung with the festal psalms (Pss. 92, 99, 62-66, Benedicite, 148-149-150). The chapter is proper to the Sunday, as sung at Vespers yesterday, and the Office hymn is O Sola magnarum urbium. After the collect of the Sunday a commemoration is sung of the Octave, the antiphon on the Benedictus is Tria sunt munera etc., proper to the 8th January.

The Mass In excelso throno is sung after Terce. The Gloria is sung, the second collect is of the Octave. Being a Sunday within an Octave there is no third collect. The Creed is sung and the communicantes and Hanc igitur are of the Epiphany.

At Vespers the antiphons Ante luciferum genitus etc are again sung with psalms 109, 110, 111, 112 & 113. The Office hymn is Hostis Herodes impie. After the collect of the Sunday a commemoration of the Octave is sung, the antiphon on the Magnificat being proper to the 8th January, Lux de luce. The Suffrages are omitted as are the Domincal preces at Compline.