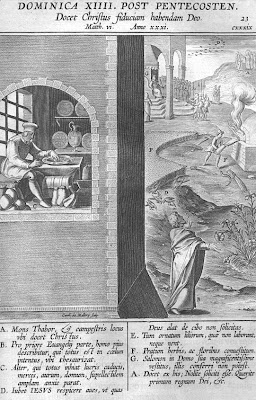 The fourteenth Sunday after Pentecost is of semi-double rite and is, this year, the Sunday within the Octave of the Nativity of the BVM and the second Sunday of September. Its liturgical colour is white.

Vespers yesterday afternoon were second Vespers of the feast of the Nativity of the Mother of God. The antiphons Nativitas gloriosae etc were sung with the psalms from the Common of the BVM (Pss. 109, 112, 121, 126 & 147). The Office hymn was Ave, maris stella. The antiphon on the Magnificat and collect were proper to the feast. After the collect of the feast commemorations were sung of the Sunday (the antiphon on the Magnificat being In omnibus his for the Saturday before the second Sunday of September and of St. Gorgonius. At Compline Te lucis was sung with the Doxlogy of the Incarnation with the Doxology Gloria tibi Domine etc.

At Mattins the invitatory is Adoremus Dominum and the Office hymn is Nocte surgentes. In the first nocturn (Pss. 1, 2, 3, 6, 7, 8, 9, 10, 11, 12, 13 & 14) are sung and the lessons continue to be read from the Book of Job. The first lesson consists of text of both the first and second lessons in the post-Clementine editions of the Breviary. The second lesson begins Si venerit ad me and is a sentence longer than the third lesson found in the modern editions continuing until the end of verse 18 of the ninth chapter. The third lesson is entirely absent from the modern books and begins Si fortitudo quaeritur (v.19) and continues until the end of verse 28. In the second nocturn (Pss. 15, 16 & 17) the lessons are from the Book of Morals of St. Gregory. These are the same as those found in the modern books. In the third nocturn (Pss. 18, 19 & 20) the homily is from St. Augustine on St. Matthew's Gospel. The lessons are longer than those found in the modern Breviary. The seventh lesson includes most of the text of the modern eighth lesson, the eighth lesson contains text not found in the later editions and the ninth lesson contains the text of the modern ninth lesson and, in addition, several more sentences. Today the eighth and ninth lessons of the Sunday’s homily are read together as an extended eighth lesson and the ninth lesson is that appointed for St. Gorgonius. The Te Deum is sung.

At Lauds the Sunday psalms (Pss. 92, 99, 62-66, Benedicite 148-49-150) are sung. After the collect of the Sunday commemoration are sung of the Octave and of St. Gorgonius. The Suffrages are omitted being a Sunday within an Octave.

At Prime and the Hours the hymns have the Doxlogy and tone of the Incarnation, Gloria tibi Domine etc. At Prime (Pss. 117, 118i & 118ii) Quicumque is sung but the Dominical preces are omitted.

Vespers are of the Sunday. The Office hymn is Lucis creator. After the collect of the Sunday a commemoration is sung of the Octave (the antiphon on the Magnificat being Nativitas tua etc). The Suffrages are omitted as are the Dominical preces at Compline.