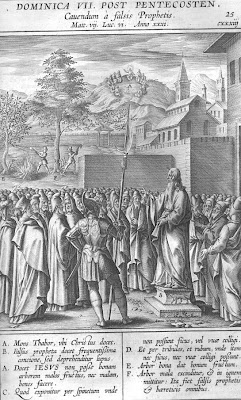 At Mattins the invitatory is Adoremus Dominum and the Office hymn is Nocte surgentes. In the first nocturn (Pss. 1, 2, 3, 6, 7, 8, 9, 10, 11, 12, 13 & 14) the lessons are taken from the First Book of the Kings. These are the same as in modern recensions, the responsories are Praeparate corda vestra etc. In the second nocturn (Pss. 15, 16 & 17) the lessons are taken from the Exposition on the book of Kings of St. Gregory. In the third nocturn (Pss. 18, 19 & 20) the homily is from St. Augustine but the lessons are longer than in the post-Clementine books. The seventh lesson is consists of text which forms the seventh and eighth lessons in the later books. The eighth lesson is several sentences longer than the modern ninth lesson and the ninth lesson is not found in the later books. The Te Deum is sung.

Mass is sung after Terce. The Gloria is sung, the second collect is of the Octave. There is no third collect being a Sunday within an Octave. The Creed and the Common Preface are sung.

Vespers are of the following feast of SS Peter and Paul with a corresponding liturgical colour change to red. The antiphons Petrus et Joannes etc are sung, doubled, with Pss. 109, 110, 111, 112 & 116. The Office hymn is Aurea luce. There are no commemorations (not even of a minor Sunday until the changes of Leo XIII) nor Suffrages. The Dominical preces are omitted at Compline.
Posted by Rubricarius at 00:00