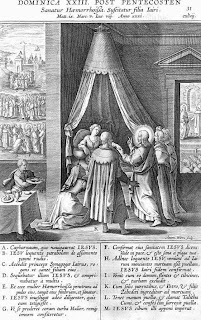 The twenty-third Sunday after Pentecost is of semi-double rite and is the fourth Sunday of November. The Gospel pericopes from St. Matthew contain the passages where the LORD heals a woman with an issue of blood and raises Jairus' daughter from the dead.

At Vespers yesterday afternoon the antiphons and psalms of Vespers for Saturday (Pss. 143, 144, 145, 146 & 147) were sung. The Office hymn was O lux beata Trinitas. The antiphon on the Magnificat was Qui caelorum for the Saturday before the fourth Sunday of November. After the collect of the Sunday the Suffrages of the BVM Sancta Maria succurre etc, the Apostles Petrus Apostolus etc, of the Patron and lastly for peace Da pacem Domine were sung. At Compline the Dominical preces were sung.

At Mattins the invitatory is Adoremus Dominum and the Office hymn Primo dierum omnium. In the first nocturn (Pss. 1, 2, 3, 6, 7, 8, 9, 10, 11, 12, 13 & 14) the lessons are the Incipit of the book of Osee. The first lesson is longer than that found in the modern editions of the Breviary and continues Et dixit Dominus... until ...conteram arcum Israel in valle Jezrahel. The second lesson begins Et concepit adhuc..., approximately a third through the modern second lesson, and continues until ... et non numerabitur (the last third of the modern third lesson). The third lesson begins Et erit, in loco ubi dicetur eis... and continues past the end of the modern third lesson Dicite fratribus vestris... until ... interficiam eam siti, i.e. Cap. 2, vv. 1 -3. In the second nocturn (Pss. 15, 16 & 17) the lessons are from the writing of St. Augustine on the City of God. These are longer than those found in the modern Breviaries: the fourth lesson includes half the text of the modern fifth lesson, the fifth lesson includes the remaining text of the modern fifth lesson and all of the modern sixth. The sixth lesson is not found in the modern editions. In the third nocturn (Pss. 18, 19 & 20) the homily is from St. Jerome on St. Matthew's Gospel. The seventh lesson contains the text of both the modern seventh and eighth lessons. The eighth lesson consists of all of the text found in the modern ninth lesson and additional text absent from the modern books. The text of the ninth lesson is entirely absent from the later editions of the Breviary. The Te Deum is sung.


At Lauds the Sunday psalms (Pss. 92, 99, 62-66, Benedicite 148-49-150) are sung. The Office hymn is Aeterne. After the collect of the the Suffrages of the BVM Sancta Maria succurre etc, the Apostles Gloriosi principes etc, of the Patron and lastly for peace Da pacem Domine are sung.

Mass is sung after Terce. The Gloria is sung, the second collect is A cunctis, the third collect is chosen by the Dean or Rector. The Credo is sung and the Common Preface is sung..

Vespers are of the Sunday (Pss. 109, 110, 111, 112 & 113). The Office hymn is Lucis creator. After the collect of the Sunday the Suffrages of the BVM Sancta Maria succurre etc, the Apostles Petrus Apostolus etc, of the Patron and lastly for peace Da pacem Domine. At Compline the Dominical preces are sung.

Email ThisBlogThis!Share to TwitterShare to FacebookShare to Pinterest
Labels: Semi-double