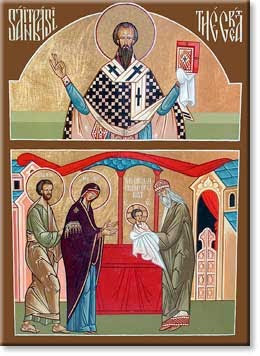 Today is the feast of the Circumcision of the LORD. It is of double rite.

At Mattins the hymn is Christe Redemptor omnium, the antiphons and psalms as on the the feast of the Nativity. In the first nocturn the lessons are from the Epistle to the Romans, Chapters 3 and 4 , 'What advantage then hath the Jew, or what is the profit of circumcision? and all of St. Paul's discourse on circumcison and the Gentiles. In the second nocturn the lessons are taken from St. Leo's seventh sermon on the Nativity of the LORD. In the third nocturn the homily is from the writings of St. Ambrose on St. Luke's Gospel. At Lauds the same antiphons as at Vespers are sung with the festal psalms (92, 99, 62-66, Benedicite, 148-149-150), the hymn is of the Nativity, A solus ortu.

At the Hours, as usual, the antiphons from Lauds are used. The Doxology in honour of the Incarnation is sung at all hymns of Iambic metre. The chapters at the Hours of Sext and None are the same as those sung on the Nativity as is the short lesson of Prime.

Second Vespers have the same antiphons and psalms of the BVM. A commemoration of the following Octave Day of St. Stephen is sung (but not of the other Octaves).

The celebration of 'New Year' now ubiquitous for January 1st was not always so in Christian countries. The feast of the Annunciation was kept as the first day of the New Year in this Realm (hence, allowing for the Julian-Gregorian difference, HMRC's Tax Year still begins on April 5th - what was March 25th in the 1752 revision). This blog, and its author, follow the Christian practice and consider January to be the eleventh month of the year.

The Byzantine icon depicts the Circumcision of Christ with St. Basil. St. Basil's feast day is also January 1st and on this day his liturgy is served rather than the usual liturgy of St. John Chrysostom in the Byzantine Rite.
Posted by Rubricarius at 10:52