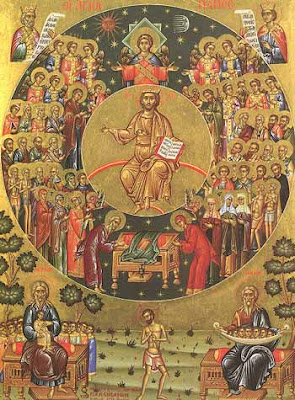 Today is the Octave Day of All Saints. It is a double feast. The liturgical colour for the Octave Day is white. Today is also the twenty-sixth Sunday after Pentecost and the third Sunday of November. The third nocturn lessons and the pericopes at Mass come from the fifth Sunday after the Epiphany.

At Vespers yesterday the antiphons Vidi turbam magnam etc were sung with psalms 109, 110, 111, 112 and 116. The Office hymn was Christe Redemptor omnium. After the collect of the feast commemorations of the Four Crowned Martyrs an of the Sunday were sung (with the antiphon being Muro tuo for the Saturday before the third Sunday of November). At Compline the Dominical preces were omitted due to the Octave.

The antiphons sung at Lauds are used at the Hours in the usual way. Prime has the festal psalms (53, 118i, 118ii). Quicumque is omitted. The lectio brevis is proper, Benedictio et claritas, to the feast and Octave.

Vespers are first Vespers of the feast of the Dedication of the Lateran Basilica. The antiphons Domum tuam Domine etc are sung with Psalms 109, 110, 111, 112 and 147. The Office hymn is Urbs beata Jerusalem. Commemorations are sung of the Octave Day of All Saints, the Sunday and St. Theodore.