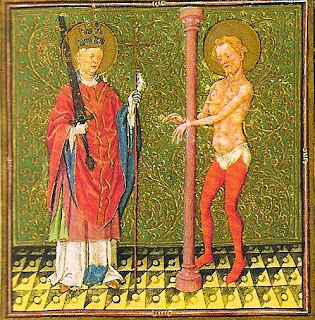 The feast of SS Fabian and Sebastian is of double rite and its liturgical colour is red. St. Fabian was Bishop of Rome in the mid-part of the third century and was martyred in the year 250. St. Sebastian, a Milanese, was an officer in the Roman army under Diocletian. On the discovery that he was a Christian he was tied to a tree and shot by archers and then scourged to death in 288. The Office is llargely taken from the Common of Several Martyrs save the collect and lessons. The Second Sunday after the Epiphany is commemorated at Vespers, Mattins, Lauds and Mass.

At Vespers yesterday afternoon the antiphons Omnes sancti etc were sung, doubled, with psalms 109, 110, 111, 112 & 116. The Office hymn was Sanctorum meritis inclyta gaudia. After the collect of the feast a commemoration was sung of the Sunday. The Suffrages were omitted due to the double feast as were the Dominical preces at Compline.

At Mattins the invitatory is Regem Martyrum Dominum, * Venite adoreumus and the Office hymn is Aeterna Christi munera. In the first nocturn the antiphons Secus decursus aquarum etc are sung, doubled, with psalms 1, 2 & 3. The lessons are of occurring Scripture, i.e. those appointed for the Second Sunday after the Epiphany, the Incipit of the Epistle to the Galatians. The first and second lessons are the same as those in the post-Clementine editions of the Breviary. The third lesson is longer and continues Cum autem placuit (...) eum diebus quindecim, i.e. the addition of vv. 15 - 18. The responsories are from the Common of Martyrs. In the second nocturn the antiphons Dabo sanctis meis etc are sung with psalms 14, 15 & 23. The proper lessons appointed for the feast are identical to those found in the later editions of the Breviary. In the third nocturn the antiphons Justi autem etc are sung with psalms 32, 33 & 45. The lessons are a homily from St. Ambrose on St. Luke's Gospel, Descendens Jesus de monte. These are significantly longer than those found in the later editions and the eighth lesson incorporates the text of both the modern eighth and ninth lessons. The text of the ninth lesson is not in the later books. Today, the eighth and ninth lessons are read as one to form an extended eighth lesson and the ninth lesson is formed of the homily for the Sunday. This is from St. Jerome on St. Matthew's Gospel. The lessons are the same as those found in later editions. The Te Deum is sung.

At Lauds the antiphons Omnes sancti etc are sung with psalms 92, 99, 62-66, Benedicite 148-49-150. The Office hymn is Rex gloriosae martyrumr. After the collect of the feast a commemoration of the Sunday is sung. The Suffrages are omitted.

At Prime (Pss. 53, 118i & 118ii) both Quicumque and the Dominical preces are omitted, it being a double feast, and the lectio brevis is Fulgebunt justi.

Vespers are 'from the chapter' of St. Agnes. The antiphons Isti sunt sancti etc are sung, doubled, with psalms 109, 110, 111, 112 & 115. The chapter is Confitebor tibi Domine Rex etc and the Office hymn is Jesu, corona Virginum. After the collect of the feast commemorations are sung of the preceding Office of SS Fabian and Sebastian and of the Sunday. The Suffrages are omitted due to the double feasts as are the Dominical preces at Compline.

Art: "Saints Fabian and Sebastian", The Hours of Catherine of Cleves (15th century)
Posted by Rubricarius at 17:01