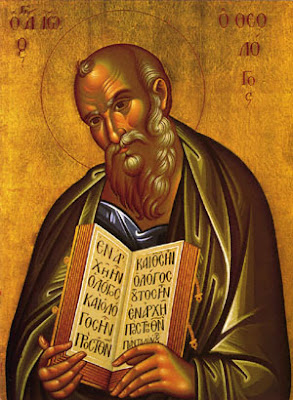 The feast of St. John the Apostle and Evangelist is of double rite with an Octave. The liturgical colour of the feast, from Mttins, is white.

At Vespers yesterday afternoon the antiphons and psalms of Second Vespers of the Nativity were sung, from the chapter of St. Stephen the Protomartyr (the liturgical colour being red). Commemorations were sung of St. John and the Octave of the Nativity. At Compline Te lucis was sung with the Doxology Gloria tibi Domine etc., the Dominical preces were omitted. This Doxology is sung with all hymns of Iambic metre until the Epiphany.

The Office for St. John is largely taken from the Common of Apostles. At Mattins the invitatory is Regem Apostolorum Dominum, Venite adoremus and the Office hymn is Aeterna Christi munera, sung with the Doxology of the Incarnation. In the first nocturn the antiphons In omnem terram etc are sung with psalms 18, 33 & 44. The lessons are the Incipit of the former Epistle of St. John. These lessons are the same as in later editions of the Breviary. The responsories are proper to the feast. In the second nocturn the antiphons Principes populorum etc are sung with psalms 46, 60 & 63 and the lessons are from the writings of St. Jerome. The fourth lesson is substantially longer than that found in modern editions, the fifth lesson shorter by the final clause of the sentence and the sixth lesson the same. In the third nocturn the antiphons Exaltabuntur etc are sung with psalms 74, 96 & 98. The homily on St. John's Gospel is from St. Augustine. The seventh lesson is slightly longer, the eighth and ninth lessons again slightly different from those found in the post-Clementine editions. The Te Deum is sung.

At Lauds the antiphons Valde honorandus est etc are sung with psalms 92,99, 62-66, Benedicite and 148-149-150. The Office hymn is Exultet caelum laudibus sungwith the Doxology of the Incarnation. After the collect of the feast commemorations are sung of the Octave of the Nativity and the Octave of St. Stephen.

At the Hours the same antiphons from Lauds, Valde honorandus est etc., are sung in the normal sequence. At Prime the festal psalms are sung (53, 118i & 118ii) and the lectio brevis is In medio Ecclesiae.