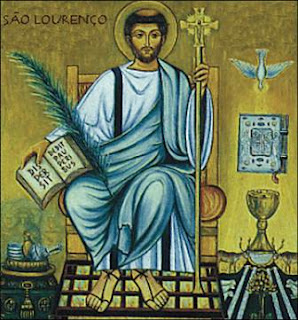 The feast of St. Lawrence is of double rite with an Octave and its liturgical colour is red. St. Lawrence's body is interred in the basilica of St. Lawrence-without-the-Walls in Rome. St. Lawrence was the first of the seven Roman deacons and known for his generosity to the poor. He was martyred in 258, according to tradition, on a grid iron and asked his tormentors to turn him over as his flesh was fully roasted on the one side. St. Lawrence is listed in the Communicantes of the Canon. The feast is ancient and appears in the Leonine and other early sacramentaries. The feast was preceded yesterday by a Vigil. St. Lawrence is, amongst many other things, Patron of the Saint Lawrence Press. The XII Sunday after Pentecost, this year the second Sunday of August, is commemorated in the Office and at Mass.

At Vespers yesterday afternoon the antiphons Laurentius ingressus est martyr etc were sung with psalms from the Common of Apostles, Pss. 109, 110, 111, 112 & 116. The Office hymn was Deus, tuorum militum. The chapter, antiphon on the Magnificat and collect were proper, the rest of the Office from the Common of Martyrs. After the collect of the feast a commemoration of the Sunday was sung (the antiphon being Ego in altissimis for the Saturday before the second Sunday of August). The Suffrages were omitted as were the Dominical preces at Compline.

At Mattins the invitatory is Beatus Laurentius, Christi Martyr, triumphat coronatus in caelis: Venite, adoremus Dominum and the Office hymn is, again, Deus, tuorum militum. In the first nocturn the antiphons Quo progredis etc are sung with psalms 1, 2 & 3. The lessons in the first nocturn are from the Book of Eccesiasticus. These are the same as in the post-Clementine editions. In the second nocturn the antiphons Beatus Laurentius etc are sung with psalms 4, 5 & 8. The lessons are from a sermon of St. Leo on St. Lawrence and are, again, identical to those found in the post-Clementine books. In the third nocturn the antiphons Strinxerunt etc are sung 14, 16 & 20. The lessons in the third nocturn are from a sermon of St. Augustine on St. John's Gospel, the same, yet again, as in the later books. Today the eighth and ninth lessons of the feast are read together to form the eighth lesson of the day and the ninth lesson is formed from the three appointed lessons on the homily of the XII Sunday after Pentecost. These are from St. Bede on St. Luke's Gospel. They are longer than those found in the post-Clementine editions with lessons seven and eight (of the Sunday) comprising of the entire text of the modern third nocturn lessons. The Te Deum is sung.

At Lauds the antiphons Laurentius ingressus est martyr etc are sung with psalms 92, 99, 62-66, Benedicite and 148-149-150. The Office hymn is Martyr dei. After the collect of the feast a commemoration of the Sunday is sung. The Suffrages are omitted.

At Prime and the Hours the antiphons from Lauds, Laurentius etc., are sung with the festal psalms. At Prime the Dominical preces are omitted and the lectio brevis is Potens est autem.

At second Vespers the antiphons Laurentius etc are again sung with psalms 109, 110, 111, 112 & 115. The V&R are proper to the feast. After the collect of the feast commemorations are sung of the Sunday and of SS Tiburtius & Others. The Suffrages are omitted as are the Dominical preces at Compline.
Posted by Rubricarius at 07:01