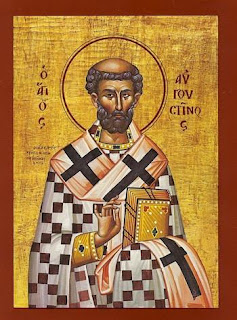 The feast of St. Augustine of Hippo is of double rite and its liturgical colour is white. The XIV Sunday after Pentecost, and fifth Sunday of August, is commemorated in the Office and at Mass.

At Vespers yesterday afternoon the antiphons Ecce sacerdos magnus etc were sung, doubled, with psalms 109, 110, 111, 112 & 116. The Office hymn was Iste confessor. After the collect of the feast commemorations were sung of the Sunday (the antiphon on the Magnificat being Observa, fili for the Saturday before the fifth Sunday of August) and of St. Hermes. The Suffrages were omitted due to the double feast as were the Dominical preces at Compline.

At Lauds the antiphons Ecce sacerdos magnus etc are sung, doubled, with Pss. 92, 99, 62-66, Benedicite & 148-149-150. The Office hymn is Jesu Redemptor omnium. After the collect of the feast commemorations are sung of the Sunday and of St. Hermes.

At Vespers there is a colour change to red and first Vespers of Beheading of St. John the Baptist are sung. The antiphons Herodes enim tenuit etc are sung, doubled, with the psalms as in first Vespers of Apostles (Pss. 109, 110, 111, 112 & 116). The Office hymn is Deus tuorum militum. After the collect of the feast commemorations are sung of the preceding Office of St. Augustine of Hippo, of the Sunday and of St. Sabina. The Suffrages are omitted as are the Dominical preces at Compline.