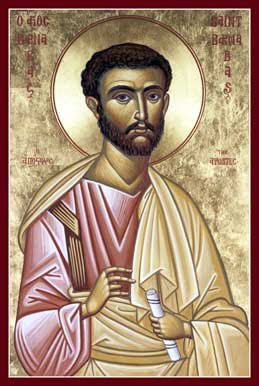 The feast of St. Barnabas the Apostle is of double rite and the liturgical colour of the feast is red.

At Vespers yesterday afternoon the antiphons Hoc est praeceptum meum etc were sung, doubled, with psalms 109, 110, 111, 112 & 116. The Office hymn was Exultet caelum laudibus. After the collect of the feast a commemoration of the fourth Sunday after Pentecost was sung. At Compline the Dominical preces were omitted.

At Mattins the invitatory is Regem Apostolorum Dominum, Venite adoremus and the Office hymn is Aeterna Christi munera. In the first nocturn the antiphons In omnem terram etc are sung with psalms 18, 33 & 44. Unlike the post-Clementine editions the lessons in the first nocturn are taken from the Common of Apostles, rather than being proper, from the Acts. The first and second lessons from the Common, taken from fourth chapter of the Former Epistle of St. Paul to the Corinthians, are the same as those found in the post-Clementine editions but the third lesson is considerably longer continuing Rogo ergo vos... to ...et spiritu mansuetudinis? (vv. 16-21). In the second nocturn the antiphons Principes populorum etc are sung with psalms 46, 60 & 63 and the lessons are proper to the feast. These are the same as those found in the later editions. In the third nocturn the lessons the antiphons Exaltabuntur etc are sung with psalms 74, 96 & 98. The lessons, from the Common, are from a homily of St. Gregory on St. John's Gospel. This Gospel and homily were replaced in the Clementine revision of the Breviary although in that edition the pericope fragment from St. John and the associated homily remained in the Common until the 1632 revision of the Breviary. The eighth and ninth lessons are read as one and the ninth lesson is formed of the three lessons from the third nocturn of the fourth Sunday after Pentecost. The homily, on St. Luke's Gospel, is from St. Ambrose. The lessons are longer than those found in the later editions. The Te Deum is sung.

At Lauds the antiphons Hoc est praeceptum meum etc are sung with psalms 92, 99, 62-66, Benedicite & 148-49-150. The Office hymn is Exultet caelum laudibus. After the collect of the feast a commemoration is sung of the Sunday.

The antiphons sung at Lauds are sung in the usual order at the Horae Minores. At Prime (Pss. 53, 118i & 118ii) Quicumque is not sung, nor are the Dominical preces. The lectio brevis is Ibant Apostoli.

Mass is sung after Terce. The Gloria is sung, the second collect is of the Sunday. The Gospel is from St. John not St. Matthew as in the later editions. The Creed is sung and the preface is of the Apostles.

At second Vespers the antiphons Juravit Dominus etc are sung with psalms 109, 112, 115, 125 & 138. The Office hymn is Exultet caelum laudibus. After the collect of the feast commemorations are sung of the Sunday and of the following simple rite feast of SS Basilides, Cyrinus, Nabor and Nazarinus. At Compline the Dominical preces are omitted.
Posted by Rubricarius at 07:01