May 6th - St. John before the Latin Gate 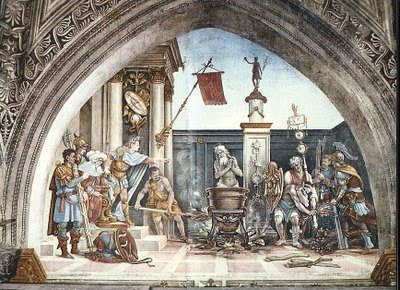 The feast of St. John before the Latin Gate is of double rite and its liturgical colour is red. The feast appears in the Gregorian Sacramentaries on May 6th and and is the dedication festival of the fifth century church in Rome named after the feast. The third Sunday after Pascha is commemorated in the Office and at Mass.

At Vespers yesterday afternoon the antiphons Sancti tui etc were sung, doubled, with psalms 109, 110, 111, 112 & 116. The Office hymn was Tristes erant Apostoli. After the collect of the feast a commemoration of the Sunday was sung. The Suffrage was omitted. At Compline Te lucis was sung with the Doxology of Paschaltide and the Dominical preces were omitted due to the double feast.

At Mattins the invitatory is Regem Apostolorum Dominum, Venite adoremus. The Office hymn is again Tristes erant Apostoli and in the first nocturn the antiphon Stabunt justi is sung with psalms 18, 33 & 44 from the Common of Apostles. The lessons for the first nocturn are the Incipit of the first Epistle of St. John, Quod fuit, found on Sunday within the Octave of the Ascension, which are sung with the responsories from the Common. The lessons are the same as those found in post-Clementine editions of the Breviary. In the second nocturn the antiphon Ecce quomodo etc is sung with psalms 46, 60 & 63. In the second nocturn the lessons are taken from the writings of St. Jerome against Jovinian, in the fifth lesson St. Jerome relates Tertullian's account of St. John's 'martyrdom'. Again, these lessons are the same as those found in the post-Clementine editions. In the third nocturn the antiphon Lux perpetua etc is sung with psalms 74, 96 & 98. The homily on St. Matthew's Gospel is again from St. Jerome. The lessons are identical to those found in the later editions. The eighth and ninth lessons are read together to form the eighth lesson and the ninth lesson is formed of the three lessons of the homily from St. Augustine for the commemorated third Sunday after Pascha. The Te Deum is sung.

At Lauds the antiphons Sancti tui etc are sung, doubled, with psalms 92, 99, 62-66, Benedicite and 148-149-150. The Office hymn is Claro Paschale gaudio. After the collect of the feast a commemoration is sung of the Sunday. The Suffrage is omitted.

At the Hours the Paschaltide Doxology is sung at the conclusion of the Office hymns. The antiphons Sancti tui etc are sung at the Hours. At Prime the festal psalms are sung (Pss. 53, 118i & 118ii), the short lesson is Scimus quoniam. The Dominical preces are omitted.

At Vespers the antiphons Sancti tui etc are sung, doubled, with psalms 109, 112, 115, 125 & 138. The Office hymn is again Tristes erant Apostoli. After the collect of the feast a commemoration is sung of the Sunday.
Posted by Rubricarius at 07:01