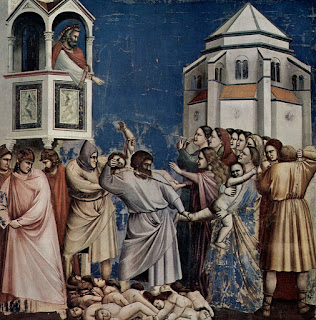 The Octave Day of the Holy Innocents is of double rite. The liturgical colour of the Octave Day, from Mattins, is always red regardless of on what day of the week the feast falls. A peculiarity of the Calendar is that no commemoration of the Sunday is made in either the Office or Mass. The orations for the second Sunday after the Nativity of Christ are actually those found for the Vigil of the Epiphany with the ancient orations for the Vigil (the collect Corda nostra etc) being found in many sacramentaries and extant in the Dominican rite.

Vespers yesterday afternoon were second Vespers of the Octave Day of St. John the Apostle and Evangelist. The antiphons Valde honorandus etc were sung, doubled, with psalms 109, 112, 115, 125 & 138. The Office hymn was Exultet caelum laudibus. Hymns of Iambic metre have the Doxology of the Incarnation. After the collect of the feast a commemoration was sung of the following Octave Day of the Holy Innocents. At Compline the Dominical preces were omitted.

Mass is sung after Terce. The Gloria is sung. The Alleluia and its verse are always sung on the Octave Day in place of the Tract. The preface is that of the Nativity (but not the communicantes).

At Vespers the antiphons Herodes iratus etc are sung, doubled, with psalms 109, 110, 111, 112 & 115. The Office hymn is again Salvete flores martyrum. After the collect of the feast a commemoration is sung of the following Vigil of the Epiphany.
Art: Giotto, Wikipedia
Posted by Rubricarius at 01:00