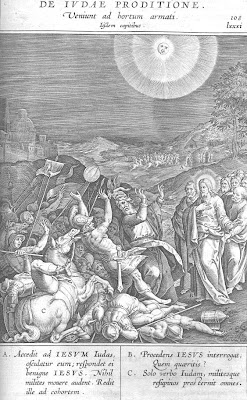 During the late afternoon of Spy Wednesday Compline is sung followed by Tenebrae . At Compline the psalms still have the Lesser Doxology at their conclusion. The Dominical preces are sung and after the conclusion of the Office Ave regina caelorum is said for the last time this year. Tenebrae is Mattins and Lauds, as usual anticipated, of the following liturgical day but the Office of the Triduum shows signs of antiquity and has developed a ceremonial extinguishing of candles that mimetically represent the desertion of the LORD by his disciples and the days of darkness - hence the name. The choir altar is vested in violet antependia and the Blessed Sacrament removed if It is present on the choir altar. The altar cross is veiled in violet and the candlesticks, the plainest set used on Good Friday, have six lighted candles of unbleached wax. In the sanctuary in about the place where the Epistle is sung is placed the Tenebrae hearse. The hearse, for the Roman rite, bears fifteen lighted candles of unbleached wax.

The choir enters, seniores ante inferiores, and take their places and kneel to say Aperi, Domine and the Triple Prayer sub silentio. When the choir rises the sign of the Cross is made as the cantors intone the first antiphon of Mattins, Zelus domus tuae. This is sung in full and then the first psalm Salvum me fac, Deus intoned by the cantors. In the last verse of the psalm, after the asterisk, the tone changes and the psalm ends, regardless of the reciting tone, with a drop of a fourth. The psalms of the first nocturn are Pss. 68, 69 & 70. At the end of the psalm (the Lesser Doxology is omitted for the Triduum) the lowest candle on the Gospel side of the hearse is extinguished. Then the next antiphon is sung with its psalm etc. After the first three psalms there is a versicle and response and then all stand for a silent Pater noster. During the Triduum there are no absolutions and blessings at Mattins. The lessons of the first nocturn are from the Lament of Jeremy the Prophet. These are longer than those found in the post-Clement books. The first lesson begins with Aleph but continues with the addition of Vau after He. The second lesson begins with Zain and continues with both Jod and Caph after Teth. The third lesson begins with Lamech and, after Nun has the addition of Samech and Ain. A responsory follows each lesson. In the second nocturn, Pss. 71, 72 & 73, the lessons are from a treatise of St. Augustine on the psalms. These are the same as those found in the modern books. In the third nocturn, Pss. 74, 75 & 76, the lessons are from St. Paul to the Corinthians on the foundation of the Holy Eucharist. These are the same as in the post-Clement books. At Tenebrae the Hebdomadarius does not chant the ninth lesson. At the end of Mattins the Tenebrae Hearse has five candles exstinguished on the Gospel side and four on the Epistle side with six remaining candles still burning.

Lauds follow immediately. The psalms sung at Lauds are Pss. 50, 89, 62-66, Cantemus Domino and 148-149-150. After each psalm of Lauds a further candle is extinguished so that after the last psalm only the candle on the summit of the hearse is still alight. After the last antiphon is repeated a versicle and response follow. Then the antiphon on the Benedictus is intoned, for Mandy Thursday this is Traditor autem dedit eis signum, dicens: Quem osculatus fuero, ispe est, tenete eum. The concept of the betrayal of Judas is key to the day. The plainsong for the Benedictus is the haunting tone 1g. During the last six verses each of the altar candles is exstinguished beginning with the outside candle on the Gospel side. All other lamps in the church are now also extinguished. During the repetition of the antiphon the MC takes the candle from the hearse and places it on the mensa at the Epistle corner of the altar. All kneel and the choir now sings Christus factus est pro nobis obediens usque ad mortem. During this antiphon the MC hides the lit candle behind the altar. A Pater noster is now said in a low voice by all and then psalm 50, the Miserere is chanted in a subdued voice. This has been adapted by many composers into polyphonic masterpieces, perhaps the most famous being by Allegri. The Miserere is of course part of the ferial preces of Vespers. After the Miserere the collect Respice is chanted by the Hebdomadarius, still kneeling. Then a strepitus, is made. After the strepitus the MC brings forth the candle and returns this symbol of the light of Christ to the top of the hearse. It either remains there, or is extinguished or, what seems the better practice, is taken by the MC ahead the procession as the choir retires.
Posted by Rubricarius at 19:50