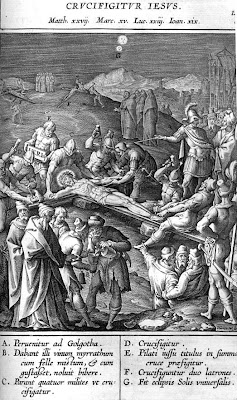 During the late afternoon or early evening of Mandy Thursday Compline is sung followed by Tenebrae . Compline takes the bare form of the other Hours of the Triduum as this morning. Compline begins with the Hebdomadarius reciting the Confiteor followed by rest of the choir responding with Misereatur and then reciting the Confiteor. After Indulgentiam Psalm 4 is recited, without antiphon and without the Lesser Doxology at its conclusion. This is followed by the first six verses of Psalm 30 and Pss. 90 and 133. The Nunc dimittis follows at once, again without antiphon or the Lesser Doxology. After the Canticle the choir kneels and Christus factus est etc is recited, as at the Hours and Vespers this morning, ending with the Miserere and the collect Respice.

The choir altar is not vested and just has six candlesticks containing candles of unbleached wax and the altar cross veiled in black, preferably, or violet. The hearse is set up as it was yesterday evening. The candles on the altar and on the hearse are lit before Tenebrae begins. Mattins begins with the sign of the Cross is made as the cantors intone the first antiphon Astiterunt reges terrae. This is sung in full and then the first psalm Quare fremuerunt gents is intoned by the cantors. The ceremonial is the same as last night. In the first nocturn the psalms are Pss. 2, 21 & 26. The lessons of the first nocturn are from the Lament of Jeremy the Prophet. These are longer than those found in the post-Clement books. The first lesson begins with Aleph but continues with the addition of Lamed, from the second lesson in the later books, after Caph. The second lesson begins with Mem and continues with Phe, Ain and Sade after Samech. The third lesson begins with Aleph (Cap.3) and, has three verses of Daleth, i.e. vv 10-12. In the second nocturn Pss. 37, 39 & 43 are sung followed by lessons from a treatise of St. Augustine on the psalms. These are significantly longer than those found in the modern books. The fourth lesson contains the text of both the modern fourth and fifth lessons. The fifth lesson has the same text as the modern sixth lesson. The sixth lesson, Ut sagittarent ... quasi non praevise, is entirely absent from the later books. In the third nocturn Pss. 58, 87 & 93 are sung followed by lessons from St. Paul' Epistle to the Hebrews. These are longer than those in the post-Clement books. Most of the third lesson is absent from the later books.

Lauds follow immediately. The psalms sung at Lauds are Pss. 50, 142, 62-66, Domine audive and 148-149-150. After each psalm of Lauds a further candle is extinguished so that after the last psalm only the candle on the summit of the hearse is still alight. After the last antiphon is repeated a versicle and response follow. The antiphon on the Benedictus for Good Friday is Posuerunt super caput ejus causam ipsius scriptam: Jesus Nazarenus, Rex Judaeorum. As last night the altar candles are extingished during the singing of the Canticle. The candle from the hearse is hidden. Christus factus est pro nobis obediens usque ad mortem with the addition of the clause Mortem autem crucis. This is followed by a sub-secreto Pater noster and then the Miserere. After the collect Respice the strepitus is made and the choir departs.
Posted by Rubricarius at 17:00