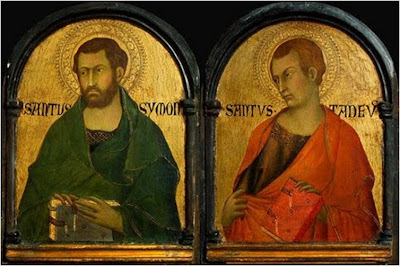 The feast of SS Simon and Jude is of double rite and its liturgical colour is red. The feast of these two apostles is kept on the anniversary of the transfer of their relics to Old St. Peter's in Rome in the seventh century. St. Simon is traditionally believed to have been martyred by a curved sword and St. Jude, also known as Thaddaeus, was martryed by a club. The twentieth Sunday after Pentecost (and this year the fifth Sunday of October) is commemorated at Vespers, Mattins, Lauds and Mass. Yesterday was the Vigil of the feast.

At Vespers yesterday afternoon the antiphons Hoc est praeceptum meum etc were sung with psalms 109, 110, 111, 112 & 116. The Office hymn was Exultet caelum laudibus. After the collect of the feast a commemoration was sung of the Sunday, the antiphon on the Magnificat being Tua est potentia etc for the Saturday before the fifth Sunday of October. The Suffrages were omitted due to the double feast as were the Dominical preces at Compline.

At Mattins the invitatory is Regem Apostolorum Dominum, Venite adoremus and the Office hymn Aeterna Christi munera. In the first nocturn the antiphons In omnem terram etc are sung with psalms 18, 33 & 44. The lessons are taken from the Incipit of St. Jude's Epistle. The second lesson is longer than that found in the post-Clementine editions and continues with text from the modern third lesson: Cum Michael Archangelus... until in his corrumpuntur, i.e. vv. 9-10. The third lesson begins Vae illis, v. 11 and continues beyond the text contained in the modern third lesson to include vv. 14-16, Prophetavit autem... to mirantes personas quaestus causa. In the second nocturn the antiphons Principes populorum etc are sung with psalms 46, 60 & 63. The fourth lesson is an historical one and is the same as that found in post-Clementine editions. The fifth and sixth are from a sermon of St. Gregory and are marginally longer than those found in the modern editions. In the third nocturn the antiphons Exaltabuntur etc are sung with psalms 74, 96 & 98. The homily on St. John's Gospel is from the writings of St. Augustine. Again, these are marginally longer than those found in the post-Clementine editions. The eighth and ninth lesson are read together to form the eighth lesson and the three lessons of the homily for the Sunday are read as the ninth lesson. These texts, from a homily of St. Gregory on St. John's Gospel, are significantly longer than in the modern editions. By the eighth lesson (of the Sunday) all three modern lessons have been read and there is additional material from the homily to complete the Tridentine eighth lesson. The ninth lesson is entirely absent from the modern editions. The Te Deum is sung.

At Lauds the antiphons Hoc est praeceptum meum etc are sung with psalms 92, 99, 62-66, Benedicite & 148-149-150. The Office hymn is Exultet caelum laudibus. After the collect of the feast a commemoration is sung of the Sunday. The Suffrages are omitted due to the double feast.

At Prime the the Hours the antiphons Hoc est praeceptum meum etc are sung. At Prime (Pss. 53, 118i, 118ii) the lectio brevis is Ibant Apostoli. Both Quicumque and the Dominical preces are omitted.

At second Vespers of the feast the antiphons Juravit Dominus etc are sung with psalms 109, 112, 115, 125 & 139. The Office hymn is Exultet caelum laudibus. After the collect of the feast a commemoration is sung of the Sunday. The Suffrages are omitted as are the Dominical preces at Compline.
Posted by Rubricarius at 20:01