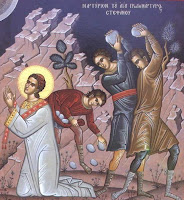 The Octave Day of St. Stephen the Protomartyr is of double rite and its liturgical colour is red.

At Mattins the invitatory is as on the feast, Christum natum, qui beatum hodie coronavit Stephanum. The Office hymn is Deus, tuorum militum sung with the Doxology of the Nativity. In the first nocturn the antiphons In lege Domini etc are sung with psalms 1, 2 & 3 all from the Common of a Martyr. The lessons are from the seventh and eighth chapters of the Acts of the Apostles with responsories proper to the feast. The first lesson begins Tabernaculum tesmimonii fuit cum patribus (7:44) and continues until the end of verse 50. This lesson is absent from the modern (pre-1911) books. The second lesson begins Dura cervice... and continues until the end of verse 55, ...a dextris virtutis Dei, i.e. including the first sentence of the 'modern' second lesson. The third lesson begins Exclamantes autem... and continues until ...planctum magnum super eum. In the second nocturn the antiphons Filii hominum etc are sung with psalms 4, 5 & 8 and the lessons are from a sermon of St. Augustine. These lessons are significantly longer than those found in the later books. In the third nocturn the antiphons Justus Dominus etc are sung with psalms 10, 14 & 20. The homily is from St. Jerome on St. Matthew's Gospel. The ninth lesson is a sentence longer than that found in the modern books. The Te Deum is sung.

At Lauds the proper antiphons, Lapidaverunt Stephanum etc., is sung with the Sunday psalms (Pss. 92, 99, 62-66, Benedicite & 148-149-150). The Office hymn is Martyr Dei, qui unicum sung with the Doxology of the Incarnation. After the collect of the feast, proper to the Octave Day, commemorations are sung of the Octave of St. John and the Octave of the Holy Innocents.

Vespers are from the chapter of the following Octave Day of St. John and so the liturgical colour is white. The antiphons Lapidavernunt Stephanum etc are sung with psalms 109, 110, 111, 112 & 115. The chapter is Qui timet Deum etc., and the Office hymn Exultet caelum laudibus. After the collect of St. John commemorations are sung of the Octave Day of St. Stephen and the Octave of the Holy Innocents.
Posted by Rubricarius at 08:01