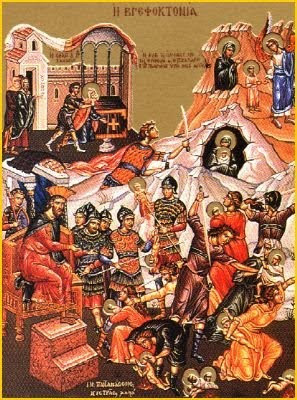 The Octave Day of the Holy Innocents is of double rite. The liturgical colour of the Octave Day, from Mattins, is always red regardless of on what day of the week the feast falls.

Vespers yesterday afternoon were second Vespers of the Octave Day of St. John the Apostle and Evangelist. The antiphons Valde honorandus etc were sung, doubled, with psalms 109, 112, 115, 125 & 138. The Office hymn was Exultet caelum laudibus. Hymns of Iambic metre have the Doxology of the Incarnation. After the collect of the feast a commemoration was sung of the following Octave Day of the Holy Innocents. At Compline the Dominical preces were omitted.

At Mattins the invitatory is Regem Martyrum Dominum, Venite adoremus and the Office hymn is Audit tyrannus anxius as on the feast. In the first nocturn the antiphons Secus decursus aquarum etc are sung with psalms 1, 2 & 3. The lessons are from the fifth chapter of the Epistle to the Romans. The first lesson is longer than that found in the post-Clementine editions. It continues Ut quid enim Christus... until ... quis audeat mori, i.e. vv. 6-7 which in later editions form the opening sentences of the second lesson. The second lesson begins Commendat autem charitatem and continues until ...per quem nunc reconcilliationem accepimus, i.e. vv. 8-11 what is contained in the modern second and most of the third lesson. The third lesson begins Propterea sicut per unum and continues until ...Christi in plures abundavit, i.e. vv. 12-15. The responsories are from the feast. In the first nocturn the lessons are taken from the Epistle to the Romans. In the second nocturn the antiphons Dabo sanctis meis etc are sung with psalms 14, 15 & 23. The lessons are taken from a sermon of St. Augustine on the Holy Innocents. These are the same as in the modern editions. In the third nocturn the antiphons Justi autem etc are sung with psalms 32, 33 & 45. The homily on St. Matthew's Gospel is from St. Chrysostom. The lessons are the same as those found in the later editions. The Te Deum is sung.

Mass is sung after Terce. The Gloria is sung. The Alleluia and its verse are always sung on the Octave Day in place of the Tract. The preface is that of the Nativity (but not the communicantes).

At Vespers the antiphons Herodes iratus etc are sung with psalms 109, 110, 111, 112 & 115. The Office hymn is again Salvete flores martyrum. After the collect of the feast a commemoration is sung of the following Vigil of the Epiphany.
Posted by Rubricarius at 08:01